I know, that's a provocative headline. (And Olympics fans are probably laughing.) I'm am regularly driven insane by email marketing that is written by people who remain clueless, even though by Internet standards this industry is incredibly mature. An email featuring NBC Sports just happened to be my tipping point. NBC Sports fail is related to website user experience; the United States Equestrian Federation is responsible for the email marketing fail.…continue reading →
[caption id="attachment_2590" align="alignright" width="300" caption="NBC Uses Facebook Connect As An Exclusive Login"] 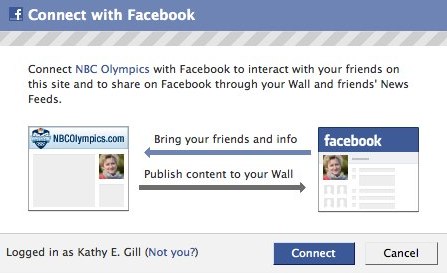 [/caption] I won't be commenting on any NBC Olympics blog posts, or giving them a thumbs-up. That's because the only option for voting is Facebook Connect. Unlike the federal government, which has also privileged Facebook Connect, NBC is a corporation. It has no "taxpayer public interest" that should mandate the option of an open -- non-proprietary, non-commercial -- platform such as OpenID.  But it should have advocates on its web dev staff who can convince their bosses that consumer choice in matters like this is in the corporation's best interest.…continue reading →
The Pickens Plan -- a proposal by Texas oil man T. Boone Pickens to reduce US dependence on foreign oil -- hit a snag with a 15-second ad on natural gas as a transportation fuel:

Ya gotta laugh at that ... given the sludge that passes for political ads! If NBC made candidates "prove" the claims in their ads, there would be no need for Factcheck.org or PoliFact! The Pickens team claims that the ad has been "cleared by every network" except NBC. In response, the social media team has published the ad online (via Brightcove, not YouTube). Here it is; you decide: …continue reading →